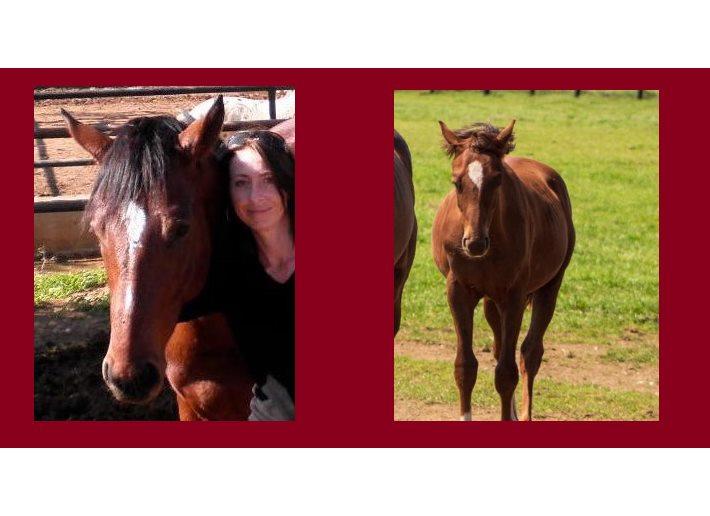 OK, so I have a secret … 550lbs worth of secret. I’ve bought a Hanoverian warmblood yearling!

D’Lorean was born in April 2019 and he comes with an impressive list of names behind him. Sired by D’Olympus, and produced by Quina (sired by Quaterhall), he promises to be quite the mover, and early indications via video support that belief.

Of course, to me, he won’t be so much a dressage diva, but my third and final horse-for-life, coming to join me, my boy Lucky and my girl Mina in Cyprus sometime in 2021. As for his stable name, it will be Sundance.

So, why is Sundance such a secret? Well, Sundance is a secret because my parents will go spare when they find out.

I may be 50 years old, but I am blessed with a mum and dad in good health who care deeply about my wellbeing and worry constantly about my financial situation. Earning a living as a writer is rarely the most dependable source of income, whereas horses remain one of life’s most dependable drain on resources.

But hey, you only live once and for a long time I’ve dreamed of having the whole-life experience. I also knew that if I wanted to realise that dream, I needed to do it now. I do not want any of my animals to outlive me and time is no longer on my side, in equine years. In dog years, I’ve still got a little room to manoeuvre (though not in my house, which is currently home to six waifs and strays that I’ve picked up over the years). But I digress.

It was my friend, Caroline – the owner of George’s Ranch where I keep my horses – who first spotted Sundance. A talented dressage rider, she has a found a fantastic source of world-class warmblood youngsters in Gamblethorpe Hanoverians in Yorkshire. In fact, it was Gamblethorpe owner, Denise Mitchell, who alerted Caroline to the charms of my boy. And yes, I think I knew he was my boy from the moment Caroline sent me the video asking what I thought of him.

It’s hard to explain what I felt when I first laid eyes on Sundance as a foal. Cute as a liver chestnut button, there was a pang of jealousy and wishful thinking that I’d not experienced watching any of Caroline’s other youngsters. And then, as luck would have it, I came into a little money…

Once he was bought, Sundance moved from Gamblethorpe to a fantastic youngstock livery yard near Pontefract called Martingale Farm, where he has spent the summer playing with his mates in lush green fields. While watching all the contortions and distortions that come with the ‘ugly duckling’ phase of a young horse’s development, I felt my love grow for this boy from afar. And then in September, when Sundance had considerably lightened after a good summer outdoors, the uncanny resemblance to my first horse Achilles became startlingly evident – as the above photo shows.

I’ve touched on Achilles before in this blog and, again, I’ll spare you the grim details, saying only that he died of colic a little over five years ago. Achilles was seven years old and it damn near killed me. But then Lucky came along to pick me up and put me back together again. Next came Mina, who deepened my love for these remarkable animals, swelling my heart even further. And slowly I began to see beyond the grief to appreciate the gift that my first boy had given me; Achilles lit a fire in my heart that has subsequently filled my life with meaning, purpose and passion. In all honesty, there is not a day that comes that I don’t look forward to. And that is down to horses.

Don’t get me wrong, I’ve always enjoyed life and I’ve had some tremendous adventures and experiences over the years, but there is a special kind of magic to be found in horses, one that soothes the soul. And though I know Sundance is not Achilles, I feel my first boy with us on each step of this beautiful new journey and I, for one, am looking forward to 2021 like no other year that has gone before.